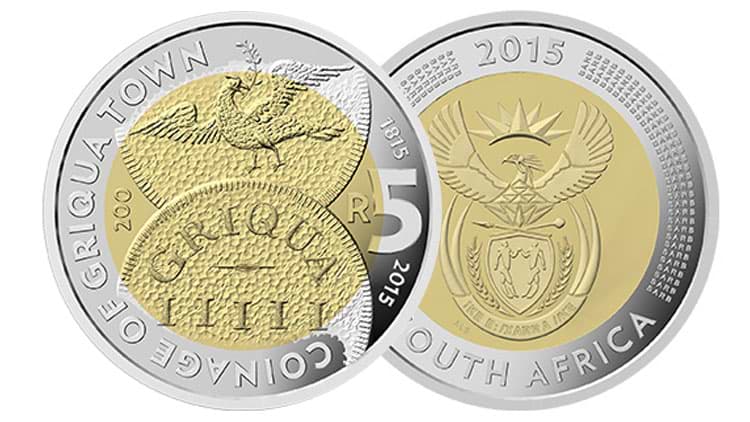 The commemorative 2015 Griqua Town R5 coin was released by the South African Reserve Bank on January 12th 2015 in commemoration of the 200th anniversary of the first coinage in South Africa. Many would like to know how much these unique coins are worth.

If you have the above mentioned coin, please contact us here

You may now be wondering how and why grading affects the value of the coin and why the prices vary. You’d probably also like to know what to do if you came across one of these 2015 Griqua Town R5 coins in general circulation. Let me share the answers with you.

How does grading affect the pricing of the 2015 Griqua Town R5 coin?

Coins receive different levels of grading right from those coins that are in very poor, worn condition, to coins that are in perfect mint state.Grading guarantees the quality of a coin. The same grading process applies to the assigning a value to a 2015 Griqua Town R5.

There are usually 5 elements that are analysed to determine the grade of a coin:

How do you know if your coin has been graded?

You will know that a coin has been graded as it will be sealed in a tamper proof, solid plastic / acrylic, airtight case to preserve the coin in good condition.

Inside, the following information will be displayed:

If your coin is not graded, who is qualified to do so?

In order to ascertain the most accurate value of your coin you would need to make sure that the coin dealer or numismatists that conduct the grading of your coin are reputable and qualified to do so.

“When it comes to coins (and South African coins in particular), the Professional Coin Grading Service (PCGS) and the Numismatic Guaranty Corporation (NGC) are the two most reputable and credible companies in the industry”

Carefully check these websites for more information and also remember to keep in mind the cost of shipping your coin to and from the grading companies if they are not situated near where you live.

How do I know if my coin is uncirculated?

Experts in the field have highlighted 2 specific indications that will tell you whether or not your coin is uncirculated.

After you have determined whether your coin is graded or not, or uncirculated or not you may assign a value to your coin. Now you may ask, where can I sell my 2015 Griqua R5 Coin?

There are a few ways to sell you Griqua R5 coin, here is a short list that will help.

Keep in mind that the Griqua Town R5 is a normal legal tender coin and is in no way more valuable than other R5 coins. If, when out shopping, you are given a Griqua Town 2015 R5 coin in return as change please remember that it was released as, and still is, a circulation coin. Those in circulation are worth only their face value.

It is the desire of the South African Reserve Bank (SARB) and the South African Mint that the general public see the beauty of the coin as it changes hands and so we have been encouraged not to hold on to this coin if we receive it as change, but rather to keep it in circulation.

The coins were designed to commemorate 200 hundred years of the Griqua Town coin. The Griqua coin was the original currency for the people of Griqua Town in 1815, and the first local currency of a South African people.

“The 2015 Griqua Town coins are “coins about coins”

Griekwastad or Griquatown, is one of South Africa’s most historical “foundation towns”. Being a stopover on the trade route, Griquatown was very important for commerce throughout South African history of the country.

“The Griqua Town R5 is the fourth commemorative R5 issued by the reserve bank since the first bi-mettalic R5 was released in 2004. Other notable commemorative coins include the 2008 Nelson Mandela birthday coin and the 20th anniversary of the democracy coin back in 2014”

These coins are a rendition of the 2 sides of the original 5 pence 1815 Griqua coin. They are positioned as slightly overlapping each other.

Why is there an image of a flying dove with an olive branch in its beak on the coin?

In 1815, the Griqua Town coin series consisted of 4 coins:

The head of all these 4 coins (the obverse) depicted a flying dove carrying an olive branch in its beak. This was the emblem of the London Missionary Society. The 2015 Griqua Town R5 incorporated this image as it is honoring these elements of the very first Griqua Town coins.

Depending on the grading of the coin and whether or not the coin has been in circulation, the value of your coin will vary. After some careful research, it may be worth having your coin graded for resale purposes.

Visit the websites of reputable grading companies and coin dealers for the best advice on how to proceed.

“When faced with 2 choices, simply toss a coin. It works, not because it settles the question for you, but because in that brief moment, when the coin is in the air, you suddenly know what you are hoping for!”